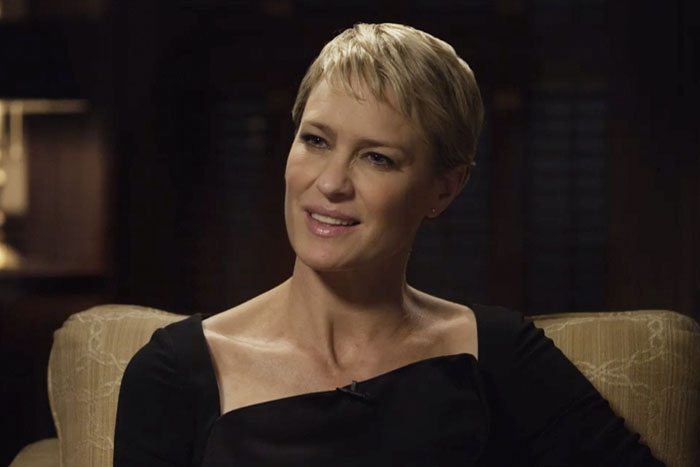 “No, it will look like I am ashamed. I’m not and I won’t,” Claire exclaims in her kitchen. If you’re a House of Cards fan, by now you’ve watched those scenes—the ones where Claire Underwood shares with the world that she’s had an abortion. But unlike other televised representations of abortion experiences, House of Cards pulls back the curtain on the complex internal processes and external actions taken by many who have had abortions.

House of Cards is a Netflix political drama that follows Democratic politician Frank Underwood and his wife, Claire, as they navigate the seedy underworld of Washington, D.C. They are a power couple who are as loving as they are conniving, and will step on anyone who gets in their way. At the end of the first season, Claire (played by Robin Wright) revealed to her doctor, and audiences, that she has had three abortions. Cut to the second season: After being asked a series of questions in a live interview about her marriage and decision not to become a parent, the reporter brings up allegations made by a past political opponent that Claire had an abortion. Caught off guard, Claire pauses and then confidently speaks out:

If I said yes, my husband’s political career would be in jeopardy. My faith would be questioned; likely my life would be threatened. But I won’t feel ashamed. Yes. I was pregnant. And yes, I had an abortion.

This scene, and the ones that follow, are all too familiar to people who’ve had abortions. While we aren’t the fictional Second Lady doing a CNN interview, we do have to think about the impact that sharing our abortion experience, both publicly and privately, will have on our lives, our safety, and our relationships. We often internally debate the details of our experience, picking apart what to share and what not to share—if we share at all—because it might change how loved ones view us. Our religious faith, desire to become parents, and parenting capabilities often come into question. We’re left defending our decisions and ourselves. One negative disclosure can lead to a person never sharing or finding support after their experience again.

The writers of House of Cards reveal the complexity of sharing an abortion story and illustrate how abortion stigma, defying maternal expectations, and the decision to speak publicly all affect Claire. This is a new narrative for audiences, and one that’s reflective of reality. Many characters with a history of abortion have been cast as feeling guilty and depressed as a result of the abortion itself, which research shows is not accurate. Instead of seeing Claire act out of shame—internalizing and accepting that she is bad for making her choices, as society would have her believe—she’s shown as a woman who was confident in her decision to seek abortion care, reflective in her choice to share, and navigating a world that she knows disapproves.

“Well I can’t use the real reason,” she explains to her communications director before telling the interviewer that she had an abortion. “The first two, I was a teenager. And I was reckless.” Claire later notes that her third abortion was with her husband and was indeed the one the reporter brought up in the interview.

Claire recognizes that viewers might judge her decision to seek an abortion, especially with how society views, and shames, “promiscuous” teen girls. She feels she must handle the situation, yet stay true to her empowered choices. Ultimately, Claire and her communications director think it “best” to falsely claim she only had one abortion, the result of a rape she survived in college. Claire’s uneasy yet calculated decision to lie minimizes her risk of attack from outsiders who may not understand her situation.

“Claire’s behavior here is called ‘stigma management’—she’s making deliberate decisions about what information about her abortions to disclose, and what information to keep to herself,” says Sea Change Deputy Director Steph Herold. “This is a rational, understandable response to living in a world where the predominant expectation for people who have abortions is to feel ashamed and keep silent.”

A more familiar, yet slightly nuanced, depiction of abortion occurs in seasons two and eight of the ABC drama Grey’s Anatomy. Dr. Cristina Yang, the determined heart surgeon played by Sandra Oh, experiences two unintended pregnancies and seeks abortions, the first ending as an ectopic pregnancy needing an emergency surgery. Both Claire and Cristina’s characters are depicted as cold, uncaring, career-driven women who do not want to be mothers. This is an inaccurate illustration of the majority of people seeking abortion, says Gretchen Sisson, sociological researcher at Advancing New Standards in Reproductive Health. “We know that the majority of women who get abortions are already parents, and that an even greater majority will become mothers at some point in their lives,” she said. “Portraying abortion as something only non-mothers do perpetuates the idea that people getting abortions are not maternal, and that abortion itself can’t be a parenting decision prioritizing the children a woman already has.”

Unfortunately, media representations of abortion and the characters’ lives after their abortion are rarely accurate. Sisson’s recent study of more than 385 abortion-related plot lines in U.S. television and movies found that 9 percent of depictions of women seeking abortions show them dying as a result of the procedure; in fact, abortion is incredibly safe, with extraordinarily low rates of complication and death.

In the end of the first season, Claire is shown speaking with her doctor about the possibility of getting pregnant. The doctor asks about her reproductive history and notes that because Claire has had three abortions, she might have a hard time conceiving. Research has shown us this is not true. Inaccurate representation of abortion in the media perpetuates stigma, leading to misinformation, increased barriers, and lack of access to safe and affordable care in the real world.

Sure, House of Cards’ portrayal may not be glowing, but it does shed light on the tough decisions women have to make after an abortion as a result of other people’s opinions. Perhaps it’s not perfect, but at least it’s accurate in its complexity—Claire is complex.

Most women do share their abortion story with loved ones, their “person” who is there no matter what, just as the Grey’s Anatomy character Meredith was for Cristina. Accurate portrayals of nonjudgmental support are important to educate audiences on how to support someone choosing abortion, and they can have lasting impacts—just ask any Grey’s Anatomy fan if they’ve identified their “person.” The idea of naming your “person” stems from a scene in season two, when Cristina says that the abortion clinic won’t allow her to confirm her appointment unless she designates an emergency contact person, to which Cristina says to Meredith, “You’re my person.”

People who have a positive support system after an abortion are more likely to adjust positively than those who do not have support. Frank has always been that person for Claire, supporting her as she heals from rape in the episode by forgoing his responsibilities as vice president to sing to her in their “smoking window” after her interview. He gives her just what she needs: normalcy.

Regardless of how the audience feels about abortion, these shows have demonstrated how we can still be supportive of someone’s decision. We must hold up representations that reveal the courage it takes to speak about abortion experiences.

When the media accurately reflects experiences of abortion, viewers are able to better understand the complexity and translate it to their own lives. Complex representations are key to shifting our culture. The centering of real experiences helps build understanding between the character, the audience, and our real-life interactions. Hopefully, with more strong and powerful characters like Claire speaking out, and the bond between Cristina and Meredith, we will be able to see the waves of change in how we talk about abortion experiences. Perhaps, one day, a real vice president’s wife will share her abortion story—and she’ll share how her “person” supported her through it.