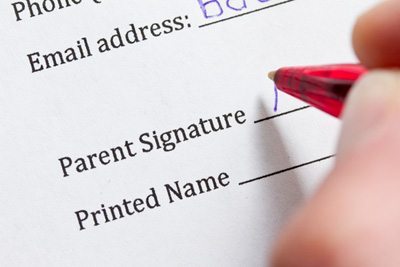 A Missouri bill would require the notification of both parents of a minor seeking an abortion, and provides no exception for a medical emergency or in cases of abuse, assault, incest or neglect. Parent signature via Shutterstock

A Missouri state legislator has filed a bill that would change the state’s requirements regarding the notification of parents of minors seeking abortions.

State Rep. Rocky Miller (R-Tuscumbia) introduced HB 1192, which would require both parents or the legal guardian of a minor to be notified that the minor is seeking an abortion. It would also require one parent to provide written consent, which is already law in the state.

Miller, who co-sponsored anti-choice legislation in the previous state legislative session, told Lake Expo that the bill is not about restricting abortion access. “It just makes sure the right people are informed of the welfare of their children,” he said.

The bill includes an exception for a parent who has been convicted of sexual abuse of the minor seeking the abortion, or for a parent whose custodial rights have been terminated by a court. However, it does not include an exception for a medical emergency, as laws in 36 other states do, nor exceptions for cases of abuse, assault, incest, or neglect, as laws in 16 other states do.

There has been a limited amount of research on the effect of parental notification laws. According to the Guttmacher Institute, these laws have led to an increased number of minors traveling to states with less restrictive laws or to states that do not mandate parental involvement to access abortion.

Miller told Lake News that he anticipates opposition: “I foresee this bill becoming scrutinized by members of the pro-abortion coalition, however I would hope they would realize this only makes sense to keep everyone informed on the welfare of their children.”

Paula Gianino, president and CEO Planned Parenthood of the St. Louis Region and Southwest Missouri, told Rewire that the bill does nothing to protect the safety of young people, and in fact, “forcing notification of both parents could put some teen girls at risk.”

“We have politicians closing their eyes to these realities and passing laws that would potentially put parents at greater risk,” Gianino said. “Some teen girls may not even know where the other parent is. The intent is to make it harder for teens to terminate a pregnancy. The current law works well. It engages parents in the appropriate way.”

The House Health Care Policy Committee is scheduled to hold a public hearing on the bill on Wednesday. During that time, the committee will also hold a hearing on HB 1103, a bill that would prevent counties or municipalities from adopting any ordinances or other policies that regulate crisis pregnancy centers.