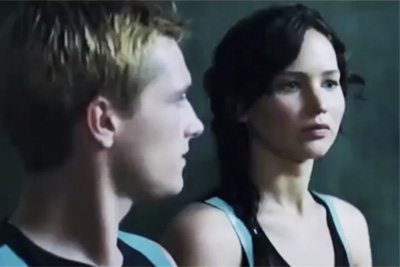 Much ink has been spilled in praise of Katniss Everdeen as a strong, flawed, mold-breaking heroine. But as the second Hunger Games movie storms the box office, Peeta Mellark—the baker, the nurturer, the feeder—is having his own moment. And well he should. Beyond the Trailer / YouTube

Peeta Mellark (Josh Hutcherson) arrives onscreen in Catching Fire, the sequel to The Hunger Games, bearing loaves of fresh-baked bread. Katniss Everdeen (Jennifer Lawrence) arrives in a blind fury. Peeta is a baker, a nurturer, a feeder. Katniss is a hunter.

They find themselves unwitting revolutionaries in their world, Panem, but in a way both are already gender revolutionaries in ours. Much ink has been spilled in praise of Katniss as a strong, flawed, mold-breaking heroine, but as the second Hunger Games movie storms the box office, Peeta is having his own moment. And well he should.

Throughout what is at times an unbearably violent dystopian sci-fi series, Peeta’s acts of gentleness and sacrifice multiply. He paints a picture of the deceased young tribute, Rue, to inspire Katniss. He tries to save her life and lay his own down repeatedly, usually getting hurt himself in the process. He warns her away from conflict and isolation, encouraging her to make friends and alliances while she glowers and fumes with mistrust. He holds her when she can’t sleep. He’s also clever, witty, observant, and even sardonic when he needs to be.

In many ways, Peeta is, as NPR’s Linda Holmes aptly said, Katniss’ perfect “movie girlfriend.” Holmes lists his qualifications in her excellent piece about the pair:

He encourages her to talk about her feelings. He encourages her to share herself with others. He promises her, falsely but selflessly, that her indifference doesn’t hurt him and she owes him nothing. If she ever wants to come to her senses, come down from those fences, he’ll be there…

He loves her as she is, while knowing he’ll never change her and parts of her will always be mysterious and out of reach.

In the face of such perfection, poor Gale, the rival for Katniss’ affection, never stands a chance—muscular and charmingly revolutionary though he is. Instead, Peeta’s almost maternal qualities are presented by series author Suzanne Collins as the natural complement to Katniss’ steeliness, her protectedness, her anger. In the books, it should be noted, Peeta is even more of a departure from the masculine norm. He’s maimed, having lost a leg in the arena. Thus the way Collins and the films present his character isn’t just representative of a simple role reversal, but an important feminist statement in and of itself. Don’t we feminists often argue that our work is only half done when women are encouraged to come into previously off-limits ambition and toughness? Don’t we complain that a future world shouldn’t just encourage strength and resolve in women, but should also cease denigrating kindness and caring as unimportant, weak, qualities—just because they are associated with the feminine? Don’t we wish men did more of the caring work?

Peeta’s centrality to the story—and eventually, his precedence over the more traditionally masculine Gale—is a crucial part of the way The Hunger Games’ larger existence flips traditional gender roles. The film has already challenged archetypes by placing a heroine in the center of a blockbuster film’s action, as well as its lingering love triangle. This isn’t Twilight, in which a love triangle presented for the female gaze can be dismissed as a “chick flick,” a cheesy aberration. It’s a mainstream adventure for all audiences. And it still caters to the young female gaze. I could hear the awws in the theater when Peeta acted particularly Peeta-ish.

This drives male critics nuts. Witness this Onion video in which a male critic “parodies” the Hunger Games by focusing solely on who’s cuter: Peeta or Gale. Meanwhile, another writer compiled a list of all the ways Peeta messes up in the arena, mocking his hapless qualities: “I am not sure what kind of sensible shoes Peeta packed for his Hunger Games experience, but they must have miserable tread, because the boy just cannot stay upright while running for more than ten seconds at a time.”

I laughed, but Peeta’s mess-ups aren’t that egregious. I can’t see this list being funny if it were a female character who gets into the same amount of trouble (unless, maybe, she’s played by Gwyneth Paltrow). I’ve seen tweets and Facebook posts mocking Peeta’s baking skills—statements that aren’t bad in and of themselves, but show that we have a long way to go in accepting male characters who break the mold.

These complaints—both about Peeta and about the larger love triangle—show a deep discomfort with the centering of a young female experience in the Hunger Games films, both onscreen and in the audience. I’m sure many heterosexual male viewers are confused by the fact that a movie that looks like it’s for them, and is paced like it’s for them, contains these lingering shots that are obviously not for them. There’s even a male-on-male CPR scene that seems like a deliberate nod to a sexually complex audience.

To be fair, Panem’s dystopian dreamscape is hardly a gender utopia. One of the more problematic tropes in the film is the way the Capitol residents’ decadence is signaled, in part, by sexual nonconformity, with the noble oppressed districts acting in traditional gender roles while their partying oppressors dress in drag and wild makeup. It would be more progressive if a range of sexual expression were seen in the districts as well as the Capitol.

This wrinkle in a seemingly progressive narrative exemplifies the way that the Hunger Games promotes revolution against oppressive government in a way that has caught the eye of socialist radicals and Tea Partiers alike. White racists have freaked out over the casting of people of color in ambiguous roles, while fans of color have embraced the series—finding themselves and their own forms of resistance in its narrative, even if they’re not explicitly there.

Personally, I’ve always appreciated Suzanne Collins’ vision of the Capitol because it reminds me of my own hypocrisy, my own complicity in succumbing to capitalist distraction while my fellow citizens starve. Yet I appreciate that her message is more complex than just foisting guilt on her readers, too. In Catching Fire, the mantra is repeated to Katniss over and over again by the other characters: Remember who the real enemy is. The enemy is a system that pits people against each other, not the people you are pitted against. Turn your anger away from your competitors to the powers that be. This is a feminist message if there ever was one, and a collectivist one. This, along with the prominence of Peeta, the boy with the bread, pushes a crowd-pleasing action flick far past the status quo.