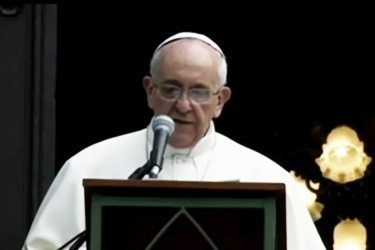 Members of the media and many progressives are beside themselves about Pope Francis. ABCNews / YouTube

If the world needed any further evidence of the public-relations prowess of Pope Francis, it was granted by Time magazine on Wednesday, with a fawning profile and bestowal of its Person of the Year Award on the current occupant of the throne of St. Peter.

Explaining the rationale for the magazine’s choice of Francis, writer Howard Chua-Eoan, narrating a video produced by the magazine, says, “The fact that he’s given so many people so much hope and inspiration in the last nine months—it’s only been nine months—no one else has done that this year.”

Yet it is that very hope that fills me with despair, for it is hope destined to be dashed. Based on nothing much—just appealing optics and some pretty words—the hope offered by Francis is mere cover for an institution that models, in the guise of holiness, the very sort of patriarchal rule over half the world’s population that facilitates violence against women, as well as their impoverishment and oppression. It is a model the pope has stated he has no intention of changing.

While Evangelii Gaudium, the papal manifesto released last month by the Vatican, excited progressives with its critique of capitalism and condemnation of trickle-down economic theories, the document, known as an “apostolic exhortation,” flatly stated that allowing women to enter the priesthood “is not a topic open to discussion.” He also affirmed, in that document, the church’s strict prohibition on abortion under any circumstances, and tacitly endorsed church teaching on the sinfulness of sex between two men or two women.

Chua-Eoan, who co-authored with Elizabeth Dias Time’s profile of Pope Francis, admits as much in the video. “Everyone’s saying he’s going to allow divorced Catholics to have Communion, he’s going to open the church to gay people, he’s going to be much more open about abortion, but he actually never said any of that,” Chua-Eoan says in the video. “He was just being more open so that these people are willing to come back to the church, without having to deal with the actual rules.”

What got people so filled with the notion that the pope represented the kind of change they could believe in was a masterful bit of public relations executed via an interview, published in English in the Jesuit magazine America, that he gave to Rev. Antonio Spadaro, editor-in-chief of La Civiltà Cattolica. In his discussion with Spadaro, the pope said it was not for him to judge gay people, and he urged compassion for women who have had abortions or gotten divorced. In all of his utterances since winning the papal throne, Francis has urged a change in tone, style, and rhetoric—away from condemnation of those who have sinned, and a more full-throated proclamation of the church’s longstanding “preferential option for the poor.”

I do not mean to suggest that the pope is insincere in his concern for the poor; I have little doubt that he is earnest in his desire to see the church better, and more loudly, defend them. For all I know, it may have been the pope’s exhortation that permitted Rep. Paul Ryan (R-WI), the very Catholic House Budget Chairman, to momentarily turn his back on his Ayn Randian, Koch-backed sponsors to hammer out a budget agreement that will save Head Start. If so, that’s a good thing.

It is important, nonetheless, to note that this emphasis also serves another of the church’s needs: the remaking of its image at a time when it is losing practicing members in the more developed nations, and competing for souls with Islam and Protestant Christian sects in the developing world.*

This loss and competition is taking place against a backdrop of scandal—multiple scandals, really, that include, but are not limited to, the massive sexual abuse of children by priests long covered up by church leaders, and the pit of corruption that is the Vatican Bank. (The pope does seem to be taking serious steps to clean up the latter.)

And so we see a great public relations campaign to highlight the pope’s “humility”—his refusal to live in the opulent papal apartments, his photo ops with the poor and infirm, his washing of the feet of convicts, and even a story leaked by one of his underlings asserting that the pope secretly slips out of the Vatican at night to minister to homeless people.

Members of the media are beside themselves, as are many progressives—particularly progressive men—who gush that a new day has dawned in the church. Raise the subject of the pope’s affirmation of the church’s exclusion of women from any form of meaningful leadership, or of the cruelty of the church’s opposition to any form of reproductive freedom—doctrine that often finds its way into the laws of nations—and you’re all but told to shut up and wait.

In their Time profile, Chua-Eoan and Dias write:

Francis is aware of the liberal clamor in the affluent West for the ordination of women. He also recognizes that Catholic doctrine, as it is currently formulated, cannot be made to justify women as priests.

When I was a child, Catholic doctrine, as it was then formulated, forbade the eating of meat on Friday. To do so in conscious defiance of the rule was a mortal sin, which carried the penalty of eternal damnation, unless one confessed the sin before dying. And guess what? Today it’s okay to eat meat on Friday, as long as you substitute some other sort of penance for your indulgence. (I can’t remember what then happened to the souls of those burning in Hell for having had a slice of pepperoni on a Friday.)

Next year, an Extraordinary Synod of Bishops, called by the pope, will convene in Rome. If Pope Francis has any intention of rendering Catholic doctrine on church leadership into a morally acceptable form—one that affirms the equality of all people in the eyes of God—it will come to light then. But I wouldn’t count on it.

Time magazine, in the title of its Person of the Year profile of Pope Francis, dubbed him “the people’s pope.” If by “people,” you don’t mean women, I guess that could work.

Sections of this article addressing the Roman Catholic Church’s decline in more developed nations and its teaching on Friday fasting have been revised for greater clarity.

*In Europe, the pews of Catholic churches are sparsely occupied, while in the United States, the Catholic population gives the appearance of stability, thanks to the entrance of immigrants from Catholic countries. However, former Catholics comprise 10 percent of the U.S. population, according to the Pew Research Project on Religion and Public Life.