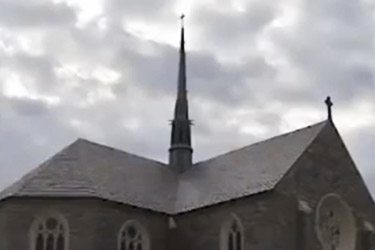 UPDATE, October 23, 4:10 p.m.: On Wednesday, Philadelphia District Attorney Seth Williams announced that his office cannot move forward with the prosecution against Father Brennan given the recent unexpected death of the 26-year-old man reported on below. According to the local NBC affiliate:

“The district attorney said he dropped rape and sexual assault charges levied against the 75-year-old priest because there was no longer enough evidence—direct or circumstantial—to continue a trial. ‘In many cases of sexual assault whether they be victims or adults or children, really the testimony of that victim is paramount to getting a conviction,’ he said.”

A 26-year-old man who, along with a number of other individuals, accused Father Robert L. Brennan of raping him as a child died of an accidental drug overdose last week. Now, the chance to finally put Father Brennan behind bars may have died along with him, despite a paper trail of abuse accusations stretching back 25 years.

The 26-year-old told authorities that the abuse lasted for three years, beginning when he was an 11-year-old altar boy and Brennan, then 60, was assistant pastor at Resurrection of Our Lord Parish in Northeast Philadelphia. All told, more than 20 boys from at least four Philadelphia parishes have filed complaints about Brennan, now 75, according to the second of three grand jury reports investigating the Philadelphia archdiocese. However, the 26-year-old’s allegations were the first to lead to legal charges, thanks to Pennsylvania’s statute of limitations on child sexual abuse. (In Pennsylvania, victims have until age 50 to open a criminal prosecution and age 30 to file a civil suit.)

In September, Brennan was arrested in his Maryland home and charged with rape, involuntary deviant sexual intercourse, and aggravated sexual assault.

But Philadelphia District Attorney Seth Williams, who publicly identifies as Catholic, said his office is reviewing whether the prosecution will continue. “The decades-long demons and scars the victim in this case endured ended this weekend,” Williams told the local CBS affiliate.

Research has long linked the trauma of childhood sexual abuse with depression, anxiety, and substance abuse.

A Brief History of Father Brennan

When the first grand jury was impaneled in Philadelphia to investigate rape in the Catholic Church in 2001, they expected to review “a small number of isolated incidents that occurred decades ago.” Instead, they uncovered evidence that “over the past 35 years more than 120 priests serving the Archdiocese of Philadelphia had been accused of sexually abusing hundreds of” children, and that with “rare exceptions” the archdiocese didn’t contact authorities. According to the grand jury:

Child molesters purposefully select the most defenseless children. They should not be rewarded for their deliberate selection of vulnerable victims by a statute of limitations that, given the severity of the harm they inflict … makes it very unlikely their crimes will be timely reported.

The grand jury discovered so much evidence that they exceeded the two-year sitting limit, and had to fold their findings into a 2005 bombshell report, which singled out Father Brennan as one of several case studies of priests with long histories of suspect behavior.

Cardinal Bevilacqua (then archbishop of the Philadelphia archdiocese) assigned Brennan to St. Ignatius parish in suburban Philadelphia in 1988. According to records, the assistant pastor at St. Ignatius expressed concern over Brennan’s “actions with young boys and teenagers” since Brennan’s first day on the job.

The assistant pastor characterized Brennan’s interest in young boys, whom he reportedly often “forced” to sit on his lap, as “extreme”; he was even said to host sleepovers in the rectory.

When the mother of the first complainant, a 13-year-old boy, met with Brennan, he gave her an autographed photograph of himself, according to the report. When Brennan was sent to the archdiocese-owned hospital for a psychological evaluation, church officials lied to parishioners and told them their pastor was on retreat.

Since that time, the Archdiocese has learned of inappropriate or suspicious behavior by Fr. Brennan with more than 20 boys from four different parishes. He was psychologically evaluated or “treated” four times. Depending on the level of scandal threatened by various incidents, Cardinal Bevilacqua either transferred Fr. Brennan to another parish with unsuspecting families or ignored the reports and left the priest in the parish with his current victims. The Cardinal’s managers advised Fr. Brennan to “keep a low profile,” but never restricted or supervised his access to the youth of his various parishes.

Cardinal Bevilacqua died last year, a day after a judge ruled him competent to testify in the trial of his one-time right-hand man, Monsignor William Lynn. Lynn was ultimately convicted of child endangerment, making him the first administrative church official found criminally liable for sexual abuse crimes committed by a priest.

The first grand jury was correct to worry that, combined with the statute of limitations on child sexual abuse, the church’s strategy of rotating priests and lying to parishioners would hamstring justice. Although the 2005 grand jury said they documented evidence of child sexual abuse by at least 63 priests, and have “no doubt” there are “many more,” not one priest faced legal charges.

“The biggest crime of all is this: it worked,” they wrote.

Shuffling abusive priests strategically exploits the way victims process trauma and frequently delay reporting, especially when the abuser is a trusted authority figure. In the largely working-class Catholic neighborhoods of Northeast Philadelphia in the 1980s, there was no bigger authority figure than a priest. The grand jury even noted a case wherein a boy who told his father about his younger brother’s abuse was beaten to the point of unconsciousness for telling “lies.”

Meanwhile, as the Philadelphia district attorney’s office has been investigating child sexual abuse and its subsequent cover-up by the archdiocese, the Pennsylvania Catholic Conference, the public affairs arm of the United States Conference of Catholic Bishops, has been lobbying state legislatures against reforming the statute of limitations on child sexual abuse.

The Fight Over Statute of Limitations Reform

Criminal and civil statutes of limitations on child sexual abuse vary state by state, but have generally been expanding, or liberalizing, since the explosion of the 2002 Catholic sexual abuse scandal in Boston.

Advocates of statute reform generally want to expand or abolish the time-frame wherein victims can file both criminal and civil complaints. In Pennsylvania, in the wake of child sexual abuse problems exposed in the church, at Pennsylvania State University, and in Boy Scout troops in Pennsylvania and elsewhere, advocates are focused on pushing for a bill that would establish what a “window”—a temporary period of time, usually one or two years, wherein victims can file civil complaints based on incidents that otherwise already timed out of the statute.

California passed a window bill in 2002. The resulting flood of lawsuits identified 300 perpetrators, which resulted in the church paying $1.2 billion in settlements. (Gov. Jerry Brown just vetoed a bill that would have implemented a second window, a decision applauded by the California Catholic Conference.)

Delaware, Minnesota, and Hawaii have implemented pieces of window legislation.

In Pennsylvania, the statute of limitation has been viciously fought over for years, but the Penn State and Philadelphia church sexual abuse scandals forced the issue into the forefront last year. State Rep. Louise Bishop (D-Philadelphia) helped bring even more attention to the issue by coming forward as a sponsor of a statute of limitations reform bill and, for the first time in her life, a survivor of child sexual abuse. Bishop, a minister and accomplished radio DJ, had been silent about her abuse for 66 years.

Still, after an elaborate and messy game of brinksmanship, the bills were once again left to die of neglect.

One of the main arguments the Catholic Conference has made against the window legislation is that over time, evidence is lost or can’t be found. But evidence has been found, again and again, and it’s the statute of limitation that prevents that evidence from seeing the light of day in the courthouse.

Advocates for survivors of child sexual assault in Pennsylvania have a fierce new ally in their corner: state Rep. Mark Rozzi (D-Berks), who recently spoke out about his own abuse at the hands of a Catholic priest at a press conference in Harrisburg.

Rozzi says he didn’t start speaking out about his own abuse until four years ago, so he knows first-hand that often, by the time victims are ready to speak out, they have already timed out of civil litigation. In Rozzi’s case, he came forward after a friend who was allegedly abused by the same priest committed suicide.

“We just want to be given a chance to have our voices heard in a court of law and to expose the perpetrator,” Rozzi said in a September press conference. “I think the community has a right to know that these men and women are still out there.”

Rozzi announced that yet another Pennsylvania bill would be introduced to try and reform the state’s statute of limitations for child sexual abuse. The legislation would raise the age wherein a victim can file a civil suit to 50 years old, establish a window for civil suits (window legislation is not possible for criminal complaints), and eliminate sovereign immunity, which means the law would apply to both public and private organizations.

For years, the problem has been that legislators against reform—namely state Reps. Ron Marsico (R-Lower Paxton) and Thomas Caltagirone (D-Berks)—stonewall such bills by refusing to allow them to get to the floor for a vote.

Last year, lawmakers supporting statute of limitations reform had to resort to a rare parliamentary procedure to force the bills to the floor for a vote. But the fight ultimately led nowhere. Chad Schlanger, chief of staff for Rep. Rozzi, says reform-supporting lawmakers are prepared to use the same procedure—a discharge resolution—again if necessary. He also says the bill will pass if it makes it to the floor. “If Marsico, Caltagirone, and [Republican House Majority Leader Mike] Turzai would get this to the floor, this would pass,” Schlanger told Rewire. “I have lists of every single member.”

As the legislative fight continues to brew in Harrisburg, Marci Hamilton, co-counsel for the recently deceased 26-year-old, is hopeful that a survivor who falls within the current statute of limitations can continue the work started by her client. “I am confident there are survivors out there who will be able to carry on the legacy started by this brave young man,” said Hamilton, a constitutional law scholar and professor at the Benjamin N. Cardozo School of Law who has represented other alleged church sexual abuse victims and is one of the most outspoken advocates for abolishing the statute of limitations on child sexual abuse.

Hamilton speculates that her client’s fate may have been brighter had he not been forced to bear the burden of being the only person to press charges against Brennan. “Perhaps if many [individuals] had been able to come forward together, he might have felt the support of other survivors through the process,” Hamilton said. “I hope the many still in [the statute of limitations] will now come forward to bring Brennan to justice and complete what our survivor started so heroically.”

Brennan’s next preliminary hearing is scheduled for November 14.