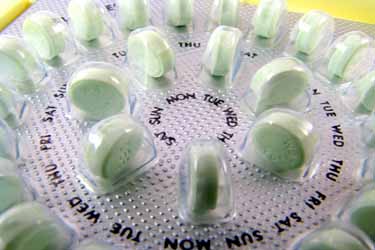 I should not have to choose between keeping my job and losing my dignity. Birth Control Pills via Shutterstock

Well, looks like the grand scheme of the Republicans to shut down the federal government—a plan that was years in the making—as a chest-thumping show of power did not turn out as planned. Instead of gallantly demonstrating that they will control the government even if the voters keep rejecting them, Republicans ended up caving while facing historically low polling and a general consensus that they are a bunch of babies throwing a tantrum. When you aim for “mighty rulers of America” and instead land on “squalling baby” as your public image, you screwed up, big time. So what went so terribly wrong for Republicans?

If you really want to understand what’s the matter with the modern Republican Party, look no further than the issue of contraception, which played an important role during the shutdown talks. The way that the modern Republican Party approaches what used to be the non-issue of contraception tells you everything you need to know about how the Republicans’ dramatic right-wing shift happened, and why they can’t seem to see that the political moves they think are genius are actually scaring and alienating ordinary voters.

To recap where mainstream America is on the issue of contraception: More than 99 percent of sexually active women have used contraception at some point. Sixty-two percent of reproductive age are currently using some kind of contraception. Only 8 percent of Americans believe that contraception is morally wrong. Unlike abortion, on which conservatives have successfully bullied and guilt-tripped people until many Americans believe the issue is morally complex, doin’ it without conceiving is a popular American past time, more popular than crappy sitcoms, ice cream, and professional sports. Even the people who pull faces and say it’s wrong like to do it.

Despite this, Republicans have been getting increasingly aggressive about attacks on contraception access. While most of them are unwilling as of yet to come right out and say it’s wrong—Rick Santorum delightfully excluded—there’s been a noticeable trend rightward in both anti-contraception policies and an escalation of anti-contraception rhetoric. It started under the Bush administration with an explosion of “abstinence-only education,” or what I like to call anti-contraception propaganda, programs that were justified by the peculiar American tradition of being hypocritical and sanctimonious for no good reason to our youth. Since then, Republicans have put a surprising amount of effort toward trying to find any excuse they can to demonize and restrict contraception.

The various attempts by Republicans to take the government or the economy hostage by threatening shutdowns or debt default have largely featured this anti-contraception bent. Previous budget fights have involved Planned Parenthood, and while the Republicans often try to claim their various attempts to defund the organization are about abortion, the fact that the money in question does not go to abortion at all, but instead to other reproductive health services, that dog doesn’t hunt. You don’t cut off contraception funding because you hate abortion. You do it because you hate contraception.

This most recent battle was the most serious of all, because House Republicans really did shut down the government and look like they were close to forcing us into a default, but despite the seriousness of the issue, one of the major reasons talks on a budget were stalled was, you got it, contraception. Many Republicans demanded a bill that would allow employers who disapprove of contraception—for you, that is, since their own contraception use is kept out of the discussion—to withhold your earned insurance benefits covering it.

While Republicans might try to write off these attacks on contraception as being about “abortion” or “religious freedom” (“religious freedom” being code for “the right to impose my faith on my employees”), the increasingly ugly rhetoric around contraception itself belies that claim. Look, they’re not even trying to hide it anymore. Ted Cruz was railing on about how the birth control pill, which works by suppressing ovulation, is an “abortifacient.” This attempt to redefine contraception as abortion has been going on for years now and has only picked up since the Affordable Care Act was passed and the possibility of women having more reliable access to contraception started to freak out the Christian right. At that same Values Voter Summit, speaker Gary Bauer characterized Sandra Fluke as “promiscuous,” basically defining the word to encompass any woman who has ever used or even supports the use of contraception, as Fluke breathed not a single word about her own contraception history during her testimony to Congress.

Clearly, no matter how much hand-waving is going on, many Republicans are trying to demonize contraception, a wildly unpopular position that frankly makes them look like lunatics. But they obviously don’t understand that this is what happens when they threaten to run the government into the ground to keep even a handful of women away from contraception or characterize one as “promiscuous” just because you don’t hate contraception.

Clearly, many Republicans live in a bubble world, constructed of right wing media and Bible-thumping bedroom communities where they get almost no exposure to the fact that some of their ideas are just plain weird. These politicians are supposed to be representatives of the people, but many of them clearly haven’t even considered the possibility that they sound like they’ve been transported here in a time machine from 1963. When I hear some Republican trying to imply that birth control pills are some kind of great controversy in America, I often wonder how their staffers hide the existence of color television from them, much less iPhones and electric cars. The modern world is clearly not the one they’re living in.

This out-of-touch mentality goes a long way to explaining how Republicans thought this shutdown showdown was a great idea. If you can work yourself into believing that birth control is controversial, then you clearly live in a chamber made of mirrors and fueled by wishful thinking. Many Republicans clearly haven’t considered the possibility that their far-right views really are out of step with mainstream America, and so they run headlong into doing things like demonizing contraception or trying to shut down the government thinking that the world is going to nod along with them. And then they’re shocked to their cores when they realize that’s not actually how this is going to work.

Sadly, of course, having no idea what the real world looks like clearly isn’t keeping many Christian right Republicans out of office. Hopefully, this recent shutdown humiliation will show many of them the value in looking at the world outside of their heads, and maybe, just maybe, some of them will learn to moderate themselves.