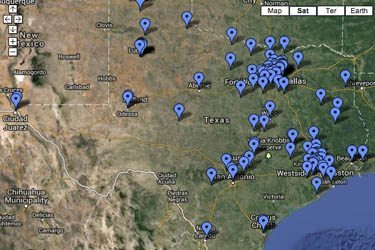 Last month, Whole Woman’s Health, a Texas-based group of reproductive health centers, began an online chronicle of its efforts to comply with, and challenge, Texas’ newly passed HB 2, the omnibus anti-abortion bill that increases restrictions and regulations on abortion providers in the state.

Two of the law’s provisions—a ban on abortion after 20 weeks and a requirement that abortion providers secure hospital admitting privileges—go into effect on November 1, while abortion clinics have until September 2014 to meet the standards required of ambulatory surgical centers (ASCs). The ASC provision is expected to shutter all but six of Texas’ existing abortion facilities, with only the facilities currently operating as ASCs remaining open after September 2014.

With 61 days left before the November deadline, Whole Woman’s Health began mapping the locations of Texas’ crisis pregnancy centers (CPCs), plotting 108 centers so far. That number is especially sobering when compared to a map of the six abortion facilities that are expected to remain open after September 2014.

CPCs in Texas provide no medical services, are often state-funded (to the tune of $26.3 million since 2005), and are expressly purposed to dissuade pregnant Texans from choosing abortion, usually through religious counseling.

With so many crisis pregnancy centers and so few licensed abortion providers, future abortion-seeking Texans could easily be misled by religious-driven centers offering pregnancy tests and counseling, but no scientifically sound medical advice or services.

From the Whole Woman’s Health blog:

If you or someone you know is seeking an abortion, always make sure and check that the clinic you are going to is an abortion facility and not a CPC. Even if you search for abortion on Google, you are likely going to see ads for ‘free pregnancy tests’ that are coming from CPCs right next to the ads for actual licensed abortion clinics.

Mapping CPCs is just one part of what Whole Woman’s Health has been doing in advance of the implementation of HB 2. On August 14, 77 days before abortion providers in Texas must secure admitting privileges at a local hospital, Whole Woman’s Health lost as an employee a doctor who resigned because of concerns about “the uncertainty of [his or her] employment status in Texas.”

With 75 days to go before the deadline, the provider received this email from a former patient, who wrote, “I am forever grateful for the treatment I received while there.”