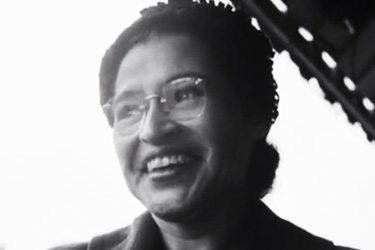 Though Parks' contribution to the progress of Black people is mainly attributed to her refusing to move to the back of the bus, her actual work and its impact on the humanity of Black women and girls in the face of overt sexual violence is not widely discussed. BiographyChannel / YouTube

Black women stand at the intersection of two well-developed ideologies in America, one about women and one about Black people. In 1944, a Black woman organized others in her community to protect and defend Black women and girls against violations of sexual assault in the Jim Crow South. As branch secretary of the Montgomery NAACP, she investigated the acts of rampant sexual violence committed against Black women. She was responsible for collecting testimonies of Black women and girls’ hostile experiences in the workplace, social spaces, and those committed at the dark end of the street.

Her name was Rosa Parks.

For many years, she led local and national coalitions, created national media opportunities, and urged Black women to “speak out” in the struggle against sexual violence. Though her contribution to the progress of Black people is mainly attributed to her refusing to move to the back of the bus, her actual work and its impact on the humanity of Black women and girls in the face of overt sexual violence is not widely discussed.

The reasons for this oversight can be linked to multiple levels of oppression and omissions that are the foundation of racism in America. However, what we discover when we explore the complete history of this Black woman, is that she was a radical Black feminist organizer long before the politic of today recognized the term. Books, like Danielle L. McGuire’s At the Dark End of the Street: Black Women, Rape and Resistance—A New History of the Civil Rights Movement From Rosa Parks to the Rise of Black Power, highlight a legacy of Rosa Parks that both acknowledges and documents the violent history Black women suffered at the hands of both Black and white men.

While some may want to dismiss this violence as a thing of the past, the reality is that Black women continue to be victims of domestic abuse and sexual assault in large numbers. In fact, a recent national survey of African Americans’ attitudes toward reproductive health conducted by Belden Russonello Strategists found that 45 percent of African-American women have experienced or know someone who has experienced sexual assault.

The lengthy battle over the reauthorization of the Violence Against Women Act (VAWA) tells us that we still have a long way to go before policymakers fully acknowledge this problem. The massive push by the public that finally led to its passage, however, gives us hope that the public wants strong prevention measures in place and assistance to all women along the spectrum of femininity, sexual orientation, and gender identity. The passage of VAWA extends federal protection and support for lesbian, gay, bisexual, and transgender people and other historically marginalized communities. National organizations like Black Women’s Blueprint, a civil and human rights organization of women and men, use advocacy, education, and healing to address the historical implications and current concerns specific to the sexual assault of women of African descent.

So as we commemorate the 50th anniversary of the March on Washington for Jobs and Freedom, let’s hope that we also pay homage to the whole of Rosa Park’s life by doing everything we can, during the next 50 years, to end sexual assault and domestic violence.