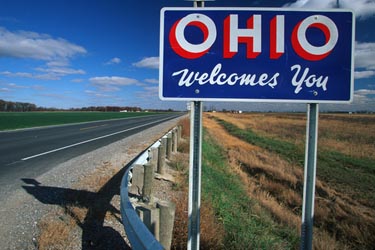 The legislature has pushed through a number of restrictions with little to no debate. So what's next for those in need in Ohio? Welcome to Ohio sign via Shutterstock

Because Republican Ohio Gov. John Kasich refused to line-item veto any of the five anti-choice amendments tucked into the massive state budget for the 2014 fiscal year, the most vulnerable Ohioans will likely find themselves with less access to family planning services, health screenings, and abortion providers and undergoing medically unnecessary ultrasounds. At the same time, they will see their tax dollars used to support religious crisis pregnancy centers that are intended to convince women not to seek abortions. Meanwhile, centers that help individuals who have been sexually assaulted are in danger of losing funding if they refer for or even mention the possibility of an abortion.

Although disappointed, reproductive rights groups are already looking ahead as they try to come to terms with this new landscape.

The budget items themselves, although signed into law, will not go into effect for 90 days, giving the groups most likely to be affected and their allies some time to evaluate their options. Some of those options may include fundraising, litigation, and preparing in advance for the 2014 election.

“We’re diligently working to determine the ‘what’s next’ here in Ohio,” Celeste Glasgow Ribbins, director of media, marketing, communication for Planned Parenthood of Greater Ohio, told Rewire via email. “We’re examining our options and looking at, for example, whether we can talk to folks at the federal level providing grants directly to the family planning providers instead of sending the money to the states.”

The federal government is increasingly foregoing local governing bodies and giving Title X funds directly to clinics to support lower-income and uninsured individuals as more defunding bills make it into law. This is true in cities like Memphis and even entire states, such as Texas. With that precedent already set, Ohio could be the next to follow suit.

Family planning clinics could be rescued through intervention from the federal level, but that’s not the case with abortion clinics, which now will come under more direct scrutiny by a state Board of Health (which includes Mike Gonidakis, the president of Ohio Right to Life, as one of its members).

The new rule requiring a transfer agreement to a hospital that is not publicly funded is likely to close the only provider left in Toledo. The other clinic in the city, Center for Choice, shut down last month after the proposed amendment threatened to strip it of its license.

It’s unclear how many other providers will have to find new arrangements now that they can no longer get a transfer agreement with a public hospital, and doctors from public hospitals will be unable to testify on behalf of clinics that require variances from the law. What is clear is that the director of the Department of Health will be able to scrutinize any clinic for the smallest of provocations, a prospect that leaves many providers feeling uneasy.

“Mike Gonidakis and Ohio Right to Life have an enormous amount of access and power at the Ohio Department of Health both because of Mr. Gonidakis’s place on the Ohio State Medical Board, but also because of their very cozy relationship with Governor Kasich,” NARAL Pro-Choice Ohio Executive Director Kellie Copeland told Rewire. “This relationship and this access has already had a chilling effect on medical providers across the state. People are worried that there is going to be a witch hunt, that they will use their power in a way that wasn’t intended, that they will find a minor infraction that doesn’t impact health care and that they will use that as an excuse to close women’s health centers.”

The potential closure of both family planning and abortion clinics is a big concern for reproductive health groups and activists in the state. “Our concern is that with clinics closing, whether they be family planning clinics or abortion clinics, is that cancer will go undetected, that women who need health care will resort to conducting procedures on themselves or relying on medications that they get over the internet or things that might not be safe,” said Copeland. “Our concern is without access to licensed quality medical providers … women’s health will suffer, and women will pay the price for this extremist agenda.”

Ohio lawmakers’ anti-choice agenda has drawn national attention from reproductive rights supporters who have been energized by the recent battles in Texas and other states. Copeland said, to individuals outside Ohio wondering how they can help, that right now the needs are simple: money, pressure, and coverage. She urged those who can to “get out their checkbook and fund the fight,” with donations to groups that are fighting the legislation, abortion funds that assist pregnant people in need, or family planning clinics whose doors may close if their funding is cut. The efforts to contact Gov. Kasich by phone, email, Facebook, and Twitter should continue as well, she said, noting that the governor neither answered direct questions about the anti-choice provisions prior to the budget signing nor took questions on them after he refused to veto.

“The really important thing that activists can do right now is make sure that Ohio voters know that Governor Kasich, who claims to have a singular focus on jobs and economy, has become the worst anti-choice governor in Ohio history,” said Copeland. “He is now sending more restrictions on access to family planning clinics, abortion care, and even information than any other governor in Ohio history. He may think that he doesn’t work for the taxpayers of Ohio, but we know better, and we have an absolute right and responsibility to tell him exactly what these measures he signed into law are going to do to Ohio women and their families.”