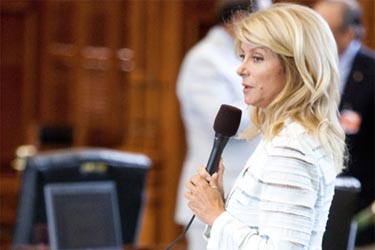 To borrow a traditional University of Texas Longhorns football slogan: They came early, they stayed late, they wore orange.

Reproductive rights supporters had another 4:00 a.m. bedtime Wednesday, the third in a six-day ordeal at the Texas Capitol complex that brought Texans from across the state to Austin to stand up against an omnibus anti-abortion bill that would have shuttered all but five abortion clinics in the state and banned abortion after 20 weeks.

Now, Texans are waiting to hear whether Republican Gov. Rick Perry will call yet another special session to pass SB 5 and other bills that didn’t pass; it is possible and even likely that he will do so.

Rewire was on the ground throughout the week. Here are our top highlights.

12:07 a.m. CST, Friday, June 21: State Rep. Byron Cook (R-Corsicana) calls State Affairs Committee testimony from the “people’s filibuster” of HB 60, the Texas house’s version of SB 5, “repetitive” and begins trying to silence the hundreds of witnesses still waiting to be heard. Many Texans had been waiting 12 hours or more for a chance to speak against the bill. When Cook eventually opens testimony again for a limited time, witness Lesli Simms’ words become a rallying cry for protestors:

“Our words are not repetitive. Our government’s attacks on our choice, on our bodies, is repetitive.”

8:58 p.m. CST, Sunday, June 23: State Rep. Jodie Laubenberg (R-Parker), sponsor of HB 60, makes a spectacular debut into the pantheon of Republicans who’ve made atrocious remarks about rape when she responds to Rep. Senfronia Thompson’s amendment that would provide an exception for rape victims in the proposed 20-week abortion ban. Laubenberg says she can’t support Thompson’s amendment because rape kits are abortions:

“In the emergency room, they have what’s called rape kits where a woman can get cleaned out.”

11:18 a.m. CST, Monday, June 25: “Yes, Mr. President, I intend to speak for an extended period of time on the bill.” With those words to Republican Lt. Gov. David Dewhurst, State Sen. Wendy Davis (D-Fort Worth) begins her filibuster of SB 5.

9:34 p.m. CST, Monday, June 25: State Sen. Donna Campbell (R-New Braunfels) calls a point of order on Davis, who has been filibustering for over ten hours. Campbell contends that Davis’ discussion of Texas’ 2011 forced transvaginal ultrasound law, and its relation to growing anti-abortion regulations in Texas, is not “germane” to the discussion. Davis gets three warnings before she must end her filibuster and the Senate can take a vote; this would be her third, and end the filibuster.

10:05 p.m. CST, Monday, June 25: After a tense half-hour and scrum of suits at the dais, Lt. Governor David Dewhurst sustains Campbell’s point of order. Citizens in the gallery erupt in anger, chanting “LET HER SPEAK!” Democrats begin an attempt to delay the proceedings with just under two hours left on the special session clock.

11:45 p.m. CST, Monday, June 25: Democratic state Sen. Leticia Van De Putte’s parliamentary inquiry starts a 15-minute roar from citizens in the gallery that delayed the vote on SB 5—which otherwise would have certainly passed. As Lt. Gov. Dewhurst attempted to call roll on the vote, an exasperated Van De Putte demanded to be recognized and asked, exasperated:

“At what point must a female senator raise her hand or her voice to be heard over the male colleagues in the room?”

12:03 a.m. CST, Tuesday, June 26: More than 150,000 people watch the Texas Tribune‘s livefeed of the state senate chamber as the Texas senate logs a vote on SB 5, two minutes after the midnight deadline for the end of the special session. The chamber continues in an uproar as Republican Lt. Gov. Dewhurst and his Republican colleagues maintain that the vote happened before midnight—apparently unaware that thousands upon thousands of people had tuned in live to watch their shameless disregard for the rules.