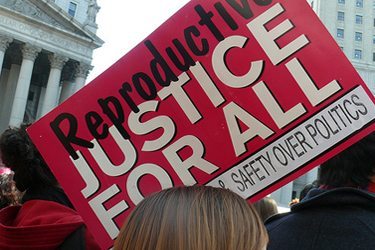 Some big victories and some small victories, with respect to reproductive rights, show that parts of the country are hoping to expand access to health care, not just limit it. ctrouper / flickr

It’s only March, and already 2013 has been a year of change for pro-choice politics. In January, Planned Parenthood made headlines by urging people to “move beyond pro-choice and pro-life labels,” acknowledging that “these labels limit the conversation.” Big changes have been happening at NARAL too, as longtime leader Nancy Keenan stepped down to make room for younger leaders. The group welcomed a new president, Ilyse Hogue, who came from the world of online organizing.

Taken together, these changes seem to indicate that more mainstream reproductive health and rights groups are realizing the limitations of reductive labels like “pro-choice” and the narrow priorities and approaches that have characterized the most visible aspects of these movements for four decades. As reproductive justice (RJ) movement leaders, and leaders of organizations that represent young people and people of color, we applaud these shifts in language approach and leadership. We also recognize and thank our sisters and forerunners in the RJ movement for recognizing these limitations and forging new paths nearly 30 years ago.

As the recent PBS documentary MAKERS reminds us, women of color were excluded—and resisted exclusion—from the mainstream feminist and choice movements from the very beginning. In response, reproductive justice, as a concept and later a movement, began to take shape in the late 1980s as women of color created their own language and infrastructures to achieve health, dignity, and justice for themselves and their communities. “Not wanting to use the language of ‘choice’ because they represented communities with few real choices, they integrated the concepts of reproductive rights, social justice and human rights to launch the term ‘Reproductive Justice,’” SisterSong founder Loretta Ross once wrote. The term launched a diverse movement that today advances issues from sex education to environmental health and from immigration reform to birth justice.

To be clear, reproductive justice is not a label—it’s a mission. It describes our collective vision: a world where all people have the social, political, and economic power and resources to make healthy decisions about gender, bodies, sexuality, reproduction, and families for themselves and their communities. And it provides an inclusive, intersectional framework for bringing that dream into being. Reproductive justice is visionary, it’s complex, it doesn’t fit neatly on a bumper sticker, and it has a lot to teach us about how to be successful in a changed and changing world.

For instance, embracing reproductive justice approaches has allowed groups like Choice USA to successfully engage, mobilize, and develop a diverse group of young leaders for 20 years, despite the misplaced handwringing about young folks’ supposed lack of engagement on reproductive health issues. Similarly, reproductive justice organizing and intersectional messaging has enabled the National Latina Institute for Reproductive Health (NLIRH) to engage Latino/as of all ages to support access to affordable health care, including abortion, heath equity, LGBTQ health and rights, and dignity for immigrant women and families.

By moving beyond labels, we have also been able to get a stronger, clearer sense of where our communities and constituencies stand on important issues. An NLIRH poll that referenced abortion in a way that resonated with many Latinos found that roughly 80 percent of respondents would support a close friend or family member who had an abortion—even though many of those people identified as “pro-life.” Recent polling shows that nearly 70 percent of young people want abortion to remain safe and legal. To put an even finer point on the problem with “pro-choice” versus “pro-life” language, recent polling from the Public Religion Research Institute shows that many people of color identify as both “pro-life” and “pro-choice.” Choice USA long ago scrapped “pro-choice” as a required identity to attend trainings; instead they search for young people who were committed to reproductive justice values, regardless of labels.

For two decades, we’ve been successful in mobilizing Latino/as and young people—groups that have become increasingly coveted by pollsters and political strategists alike—precisely because we’ve been able to move past labels, speak their language (figuratively and literally), and meet people where they are. We’ve also learned to incorporate the cultural touchpoints, histories, and modern heroes that are relevant to these groups. A young person may not feel a strong connection to Roe v. Wade, but she may connect to Krysten Sinema or Samhita Mukhopadhyay. A Latina may not feel drawn in by the story of Norma McCorvey, but she may relate deeply to Dolores Huerta or Angy Rivera.

We often hear heartbreaking stories from women who must make tough decisions about their health, lives, and caring for their families. It’s not unusual for us to hear from a woman struggling to care for her children because she’s paid less than her male counterparts, a woman who can’t access abortion because she doesn’t have a clinic in her state, or a young queer person whose education is endangered by bullying at school. A reproductive justice framework acknowledges these real-life conflicts and challenges the structural barriers that perpetuate injustice.

Here’s the really good news: Although the reproductive health and rights movements are reorienting in search of new, more effective ways to engage the “emerging electorate,” that electorate is already living and voting based on its progressive values. Who was responsible for re-electing President Obama? It was widely reported that women, generally speaking, were responsible for Obama’s victory, but it was only because women of color voted in such high numbers that there was even an aggregate gender gap. Young people also played a critical role in the 2012 elections, including youth of color who turned out in record numbers, despite active suppression efforts. A recent Wall Street Journal poll showed that support for abortion rights in the United States is at an all-time high, and the researchers credited Black and Latino Americans for driving the upswing.

Young people and people of color will continue to play significant roles in the future of our movements and the future of our nation, and our experiences have taught us that reproductive justice-informed organizing and advocacy may well be the key to reaching them. It’s exciting to see how advocates are recognizing and adapting to the needs of our increasingly diverse audiences and to the complex world we inhabit. It will be even more exciting to watch as more people begin to engage more deeply with the framework, principles, and values of reproductive justice and to see how all corners of progressive activism and advocacy might benefit.