Now there is one more reason for women to consider their childbirth options and to fight for their right to thorough, unbiased and accurate information when thinking about what kind of birth for which they’d like to plan.  According to US News & World Report, a new study undertaken at the University of Colorado, Denver, School of Medicine, found that repeat cesarean sections are not only riskier to newborn health than VBACs (vaginal birth after a previous cesarean section) but also result in a more costly birth:

Babies delivered by elective, repeat cesarean section delivery are nearly twice as likely to be admitted to the neonatal intensive care unit (NICU) than those born vaginally after the mother has previously had a c-section…

"In addition," noted Dr. Beena Kamath, the study’s lead author and a clinical
instructor of pediatrics at the University of Colorado School of
Medicine:

the cost of the birth for both mother and infant was more expensive in the elective repeat c-section group compared to the vaginal birth after c-section (VBAC) group.

There has been a long-standing debate over the safety of VBAC childbirth to women as compared to repeat c-sections, one that has become more heated as maternal
health/midwifery/out-of-hospital birth advocates have pushed back on "conventional wisdom" about birthing choices. Midwives have long asserted, with much evidence to back them up, that VBACs are not only safe in low risk pregnancies but in fact safer for women than a repeat c-section.

Though over the last few years some use the results of studies to "prove" that VBACs are not as safe for the mother (based on the fact that uterine rupture can occur during a VBAC), in fact those studies have been repeatedly dissected and disputed. There are risks associated with VBACs, but the evidence shows, according to Childbirth Connection:

If you do not have a clear and compelling need for a cesarean in the present pregnancy, having a VBAC rather than a repeat c-section is likely to be:

What we know about VBAC is that there is about an 85 percent success rate if a woman
is really supported – if doctor or midwife believes in giving the
woman a fair shot at that.  A vaginal birth is still safer than a
c-section. C -sections are stil major surgery, with risk of blood loss and
infection, as well as secondary trauma to other organs. The same is also true for
a VBAC. Even with the risk of uterine rupture, a VBAC is stil safer than
a repeat C-section. Not only is it safer, but it’s more cost effective to
not have internventions, NICU costs, etc.

The rates of c-sections in this country overall (planned and unplanned), have risen dramatically in the last few years.  Now, 1 out of every 3 births are via cesarean section. And having one c-section is a predictor for future birth as well. 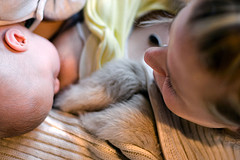 According to the study, women who have a c-section for their first birth have a 90 percent chance of delivering via c-section again.

US News & World Report writing on the study’s findings of initial and future c-sections quotes Dr. Alan Fleischman, senior vice president and medical
director for the March of Dimes, based in White Plains, N.Y.:

The decision to have your first c-section is very important. There should be a clear medical indication [because] your first may dictate subsequent [delivery methods].

What we know is that, making allowances for the overuse of medical interventions during childbirth, vaginal birth in the United States carries inherently less risk to the mother than c-sections do and can lay the foundation for more choices for future childbirth options as well. Now, with this new study, the evidence also suggests that babies born via c-section have poorer health outcomes than do newborns born vaginally.

These are some startling statistics – almost half as many newborns birthed vaginally were admitted to NICU (Neonatal Intensive Care Unit) as those birthed through cesarean section. In addition, both the length of the hospital stay and the total costs were larger for women undergoing c-sections than for women who birthed vaginally. The group with the worst health and economic outcomes were actually the "failed VBACs" but, as Cooper points out:

There are the concrete take-aways of a study like this: newborns suffer from fewer respiratory and other health complications, hospital stays are shorter and less costly and the woman’s health outcomes are generally more positive as well.

And there are critically important peripheral or unintended conclusions to draw from this kind of an exploration as well. Women need to know that having a vaginal birth after a prior cesearean section is possible, says Dr. Fleischman with the March of Dimes. Many hospitals and providers currently will not do VBACs because of perceived risks which is why, as Tracy Cooper tells me:

The more studies we do and the more we push back, the more we say, actually – no – VBAC is safer for moms and babies, the better it will be for women! There needs to be that voice that people can hear loud and clear so doctors and hospital staff feel supported to offer this and women have access to a full range of options.